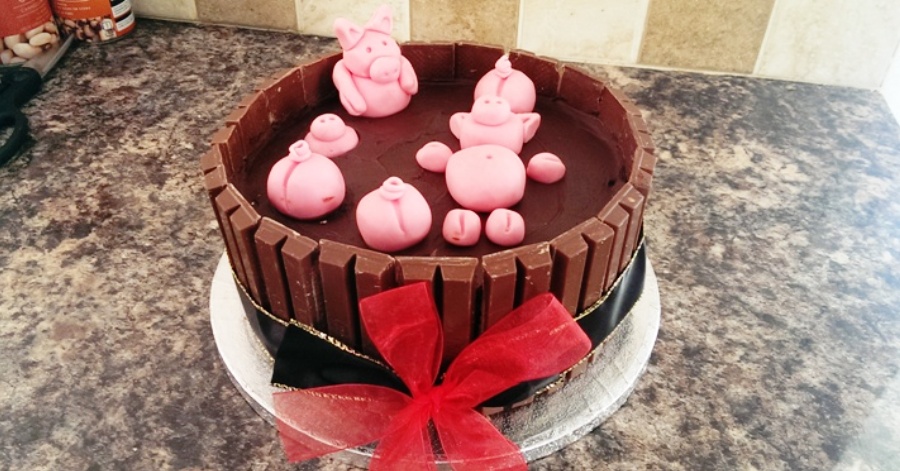 So yesterday I asked a question on the facebook page. Life is always better with…

It’s with equal parts admiration, and concern that I can confirm the answer was a resounding CAKE!!! (Though Nicola deserves a nod for elevating horses to share the lofty status that cake holds in our lives)

It’s possible perhaps that I should have started a blog on cakes rather than horses health, but I’m going to continue to resist for the moment 🙂

What I’ll do instead is a guest post (can I do a guest blog post on my own blog – wow that’s confusing!) The subject is the guest rather than the writer… I’m known internationally for cake as well as hoof related stuff so I think I’ll get away with it.

Yesterday was my sister’s birthday; so much cakey goodness was to be had. I decided to hop on the Hot Tub Pig Mug Cake band wagon, though I rarely follow instructions to the letter so I’ll talk you through what I did here and you can have a go yourself… It’s really way simpler than you think it will be! 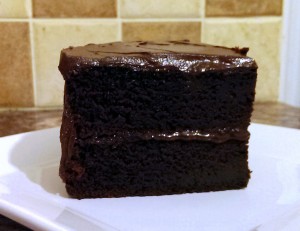 I used this cake recipe from BBC Food http://www.bbc.co.uk/food/recipes/easy_chocolate_cake_31070

It’s crazy simple and there’s practically no washing up as you can make the whole thing in 1 bowl and a measuring jug. Also – it tastes amazing, and I’m fairly critical about chocolate cake recipes. (If I’m gonna be fat – it’s gonna be worth it!!)

I mostly follow the recipe, though I tend to use a little less sugar and put a teaspoon of espresso powder in the cake, sometimes in the icing too, depends on my mood. Also (and this is a tip for all baking) good quality vanilla essence (I use vanilla bean powder) makes all the difference. Seriously!

If I’m making that cake without the hot tub tomfoolery then the quantities for the icing are fine. When I made it with hot tubness, I increased the icing by 50% (that’s 300ml cream and 300g chocolate for those who are allergic to maths – I’m allergic to apples – who am I to judge!)

Making the pigs is really easy actually. I’m not good at the fiddly decorating stuff, my cakes get by on their personality not their looks, but even I managed the pigs. In fact the kit-kats were more trouble than the pigs. 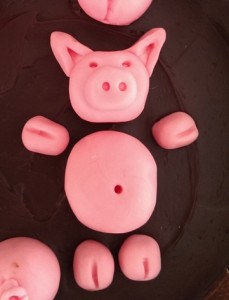 I think this guy’s mother was a wolf! Look at his ears!

To make the pigs check out this post.
http://smashingreader.com/Making_Life_Whimsical_s74934_p5

You can buy pink icing from cake shops, some supermarkets will have it now. Ebay as well – yep, you can get anything for cakes there. If you’re in the states you can buy the pigs ready made I think. You could also by white icing and kneed a bit of red food colouring in (you’ll want a gel not a liquid food colour – also available online or at cake decorating supplies)

I wouldn’t make the fondant icing from scratch because, well, life is for living, and icing isn’t my idea of a good time, but you could if you wanted to.

I’ve no idea how 6, 4 finger kit-kats did the job for their cake, I needed 10 and 1 extra finger. I guess I make bigger cakes…

The ribbon is essential – or at least something to hold all the kit-kats in place while the icing set properly (and putting it in the fridge to encourage this would be a good plan, though you’ll want to serve it at room temp)

Once you’ve done all that – I want pictures please!

P.S. If you’ve found this post because you did a search for something chocolate cake related… Yes, you are actually on a blog focusing on horse’s health. Would you like a report on The 5 Most Effective Hoof Infection Remedies and The One I’d Always Avoidor maybe help with How To Take a Digital Pulse? 🙂