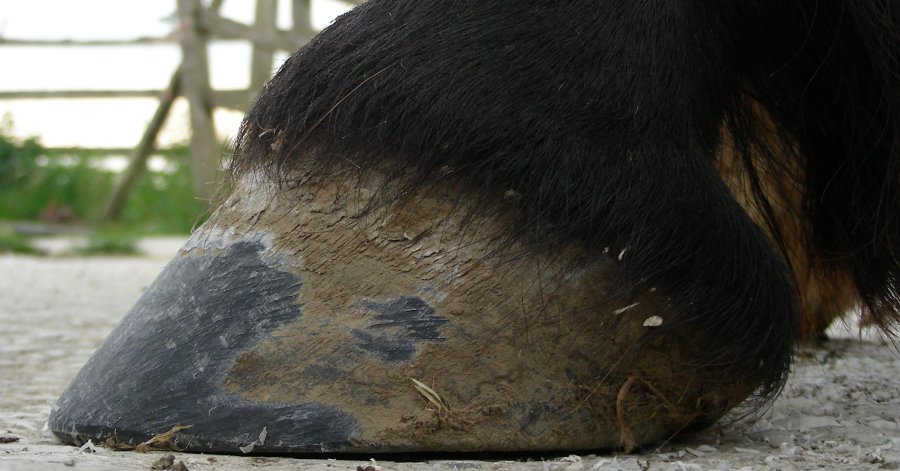 One of the first questions everyone asks when considering removing shoes and ‘going barefoot’ is ‘What’s the difference between a farrier trim and a barefoot trim?’

It’s a fair question, but it’s also a question that makes my brain melt a little bit. There’s nothing wrong with the question, but I’m a very literal person, and there’s no such thing as a (singular) farrier trim or a (singular) barefoot trim.

A farriers wife once said to me that if you put 10 farriers in a room, they’ll come up with at least 11 ways to balance a hoof.

It seems to be commonly accepted that a ‘barefoot trim’ uses a mustang roll and a ‘farrier trim’ also referred to as a ‘pasture trim’ doesn’t include a mustang roll.

Well… Hold on to your unmentionables here but I’m about to blow your mind!!

A mustang roll is little more than rounding off the outside of the wall in most cases. And while a farrier (particularly a UK based one) might not do a mustang roll (because why would you in a country with so few mustangs – equine or automobile) they do very frequently round the foot off. Which, like I said, is much the same thing.

The mustang roll, isn’t magic, it’s not the reason your horse becomes sound, and it doesn’t make barefoot trimming superior to farrier trimming in anyway.

Don’t get me wrong, I mustang roll all over the place, there’s good reasons to do so, but it’s not the difference between a barefoot trim and a farrier trim.

I suppose there are some schools of barefoot trimming that apply a mustang roll with such gusto that they actually remove all ground bearing wall. In this case it probably is more significant, though I’d argue that’s not a mustang roll (I’d also recommend against doing this in most cases, but that’s a whole different debate)

Farriers don’t, as far as I’m aware roll the wall when putting a shoe on, which may be where the idea that farriers don’t roll the wall comes from. I suppose it’s possible that a farrier is so used to not rolling that they don’t do it when trimming a shoeless horse, but I’m not sure whether that’s a sign of adhering to farriery sciences or just laziness.

I know I have farriers who read this blog, so feel free to enlighten me (and the rest of us) in the comments. You do after all know far more about farriery sciences than I 🙂 (hopefully!)

It’s Not About The Trim

So… Here’s another question… What’s the difference between a farrier and a barefoot trimmer?

The short answer is attitude and mind set. The mind set does frequently come from the training though, so training is important, but for me, mind set is more important.

Being a farrier or a barefoot trimmer really doesn’t determine how open minded you are, or how big your ego is.

Farriers are trained in putting shoes on. Yes they’re trained in trimming hooves, but most of the work they do is with shod horses (unless they’ve decided to specialise in barefoot horses).

When you trim a hoof with the intention of putting a shoe on, you tend to trim the hoof shorter than you would if it were to be barefoot.

Now I’m not saying farriers don’t leave a barefoot longer. They do (or should). But what they’re used to seeing; what looks right to them, is a shorter foot. It’s a matter of conditioning of the mind, not skill.

If you have a farrier who works with a lot of barefoot horses, they may not have this perspective issue.

It’s easy for me to say that every farrier barefoot trim I’ve seen has been too short (because it has – in my opinion) – but it’s essential to remember that anyone with a farrier trim that isn’t too short, is very unlikely to contact me.

Generally people call me because there’s a problem.  They don’t call me when everything is as it should be.

I’ve only ever had one person call me to tell me how great her farrier was (and she seemed somewhat put out by my advice to make sure she always has the kettle on for his arrival, and to buy him a bottle of whisky for Christmas)

Farriery approaches balance from a static point of view. Is the right side of the hoof the same height as the left side.

You may have a farrier who’s done barefoot training. And that’s great. But I’d question whether the mindset has changed.

Years ago, when I was training, I met a farrier on a course in the States. Lovely bloke, he taught me how to remove shoes, and how to get round my problem of very long legs when trimming horses with very little legs.

He was training for a barefoot trimming qualification. He wasn’t just doing a course out of interest, he was serious about barefoot. But he still shod horses. That’s fine, his reasoning was, if they’re going to be shod they’re better off shod with a strong healthy hoof. I agree with him.

But he was still shoeing those crazy weighted shoe things they put on gaited horses to exaggerate the gait. The methods are far too horrific for me to bring myself to insert a link here.

Again his reasoning was, that the horses were better off with a strong balanced foot before the weighted contraption was applied, and he’s right on that point, very much so. The traditional way to prepare a hoof for such a contraption is called soring and it’s exactly what it sounds like.

(soring is illegal, and he didn’t work with anyone who practiced it)

He also liked how challenging the work was as it requires a high level of skill.

My point here isn’t about horrific things that occur in the fringes of horse shoeing. My point here is that he had a lot of very good quality barefoot training, yet his mind set was such that applying ridiculous weighted shoes still fit comfortably within his idea of hoof care.

So Lets Move on to Barefoot Trimmers.

Personally for me I think of balance as dynamic. Technically that makes it equilibrium, but I continue to use the term balance as that’s what people understand (plus the whole hoof industry is built on misnaming things… barefoot trimming isn’t about barefoot and it isn’t about trimming… white line disease isn’t a disease of the white line)

What’s this dynamic balance thing all about? Well it’s not just about the hoof being in balance with the ground.

Are the hoof structures in balance with each other? Not just in terms of right side equals left side, but if you have a very strong wall, but weak bars or weak frog, then it’s not in balance.

Is the nervous system in balance? The digestive system? Lymphatic system? Musculoskeletal system? Is all of this in balance with the hoof.

I do look at what’s missing from the hoof, but I don’t think about what I can apply externally to fix this. I think about how the body functions to create this result and what stimulus does the body need so it grows stronger, healthier, more balanced structure.

I do of course consider what I can apply to the outside to make the horse comfortable (if he isn’t already) and how that will stimulate (or interfere with) correct growth. But the external things I apply, aren’t what’s fixing the problem. They’re what’s creating the environment that stimulates the necessary healing (or strengthening – same thing really) within the horse.

So that’s all about me, and I should be talking about barefoot trimmers in general, just as I did with farriers.

Again this is down to mind set. Barefoot trimming thinks about healing, not about applying artificial structures.

My personal opinion is that teaming the environment with trimming will get results faster, and require less effort. I’m all about maximum results for as little effort as possible 🙂

I’ve never known anyone question which farriery methods are being applied. Horse owners tend to think of farriery as a singular method but there’s a multitude of ways in which farriers trim hooves, apply shoes, wedges, pads, filler, nails, wraps and more. There’s hundreds of different makes and styles of shoes, made out of an increasing wide array of materials. They’re even 3d printing titanium shoes now!

For some reason though, very few people question what farriery involves, or what methods their farrier is trained in.

So… Here’s what I suggest…

Don’t forget, YOU employ THEM! But in addition to that, you’re employing them to advise you and provide a service. It’s a strange dynamic. You’re the boss, but they tell you what to do 🙂

There is no right or wrong. It’s about what suits you and your horse. But if your horse is consistently lame, sore, or under performing, you might want to change something. That might be management, or it might simply be your expectations (for all I know your horse is over 30 years old and you’re trying to go eventing every weekend. It’s unlikely farriery or barefoot sciences can help you with that…)

I know that’s not a neat little answer that lumps all farriers in one box and all trimmers in another box. Come to think of it, neither can horses or horse owners be lumped together into neat little boxes. I can’t tell you what’s right for you.

I can tell you that no-one, farrier, trimmer, vet or otherwise ever entered their chosen profession with the intent to harm horses, or deliver poor service to their clients. I realise that they may have made mistakes, or taken a wrong path somewhere along the line, but I don’t think anyone consciously sets out to harm horses.