What Do You Mean ‘My Horse is Footy’? 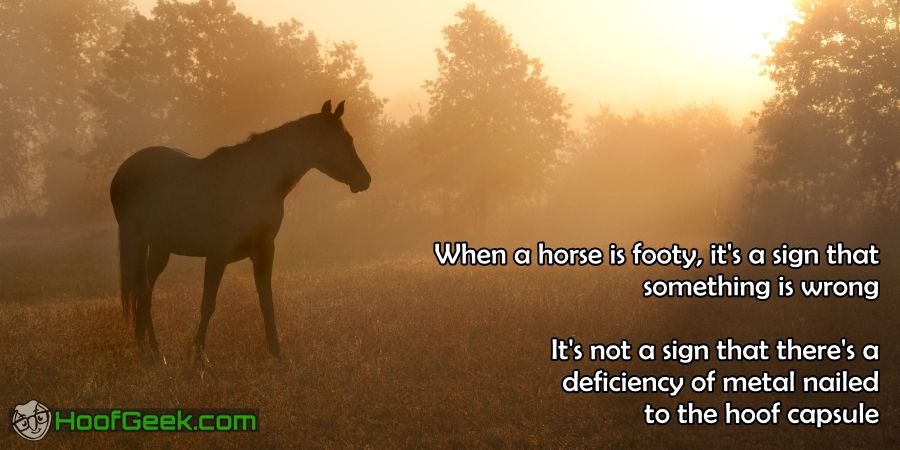 I often hear people, and see people online saying ‘my horse is footy’ but the other day I was asked a rather insightful question on the facebook page in response to a meme… What do you mean by ‘footy’?

‘Footy’ is a term we use a lot in the UK (sadly) and I have to admit, if anyone ever describes their horse as footy, I usually ask them that very same thing. What do they mean when they say footy?

When I was putting the meme together, I questioned myself, whether I should use the term, but reasoned that everyone used the word so much, they must know what it means (even if it does mean something different to each person). And – you know – word space is limited in a meme!

It’s a discomfort in the hooves, usually in all 4 feet, though it tends to be more obvious in the fronts. It’s low grade lameness, not restricted to just one foot. Horses might show any combination of the following

• Discomfort over certain surfaces, and look sound as a bell otherwise.
• Shuffling when turning
• Rocking back on hind legs when turning
• Lameness on a circle, but totally fine in a straight line
• Very quiet hoof landing
• Shortened stride
• Excessive heel first landing (most people wouldn’t include this, but I would if I was being really strict)

If you’re seeing more pronounced lameness than I’ve described above, I hate to be the one to tell you, but you’re beyond ‘footy’ you’re lame

We use the term ‘footy’ as an abbreviation of ‘footsore’.

Which I realised, as I was writing my response on facebook, is fairly worrying in itself!

Abbreviations are used usually when a term is so common it becomes laborious to use (spell or pronounce) the long version. Or to give something a nick name.

There’s 2 main reasons to give something/someone a nick name.

Out of those reasons, we can rule out affection. (Anyone who loves horses being footsore, can please use the back button in their browser and never darken my blog again!)

So we’re left with using the term ‘footy’ because:

(A) it’s so common how could we possibly manage saying ‘footsore’ that frequently!
(B) because we’re trying to downgrade the significance of what we’re talking about.

It’s not uncommon for a horse to suffer a bit of footsoreness, on the odd occasion, but more than that, I think we’re using the term ‘footy’ to make it sound less serious and less frightening than the full word ‘footsore’.

Here’s what concerns me… We use the term footsore to be a less intimidating way of saying ‘your horse has mild laminitis’.

So footy = footsore = mild laminitis = on the road to laminitis = not where you want to go!!!

From years of working with clients, I’ve found it’s beneficial to use a variety of terms. Some clients would be so stressed out by the idea of their horse having mild laminitis, they’d spend all their energy worrying, to the point it would be totally counter productive.

Generally, those same clients would bend over backwards and do whatever it took to increase their horses comfort, so dealing with a ‘slight touch of footiness’ is absolutely fine.

Some clients would reason that a footy horse would be fine and comfortable in the field as its soft, so it’s all ok to turn them out and ignore the problem. Clearly – that’s not really the best way forward, so breaking out the big L-word is necessary! (erm Laminitis, just in case you weren’t sure which L-word)

Some people do the same thing with laminitis. I was at a seminar recently where a vet was talking about this very issue. He was baffled by how owners seemed to say things like ‘oh it’s just a touch of lami’ when really they should have been saying ‘MY HORSE HAS LAMINITIS!’

I get that with long term laminitics it can be a very long and hard road. There are always going to be bad days, and if you treat every bad day like a disaster, you’re going to drive yourself to an early grave.

Being stressed out rarely helps solve a problem, in my experience it’s lack of understanding of the problem that’s the biggest cause of stress.

I guess, it’s not so much the words you use, but your understanding of those words, and the actions you’re taking. ‘he’s a bit footy today’ is fine if that’s your way of acknowledging that you need to take action and tweek (or totally rearrange) your horses management.

It’s not fine if it’s your way of pretending everything is fine and it’s all going to get magically better if you stick your head in the sand.

In next week’s blog I’ll cover the reasons why footsoreness, mild laminitis, or low grade laminitis – call it what you will, happens in the first place.

If you need to make your horse’s hooves more comfortable FAST, then I recommend therapeutic pads. If you want to know more about them, there’s a guide for using and fitting therapeutic pads in the free resources of the Hoof Geek Academy

Do you use the term footy? Has this article changed how you feel about it, or changed your understanding of it?