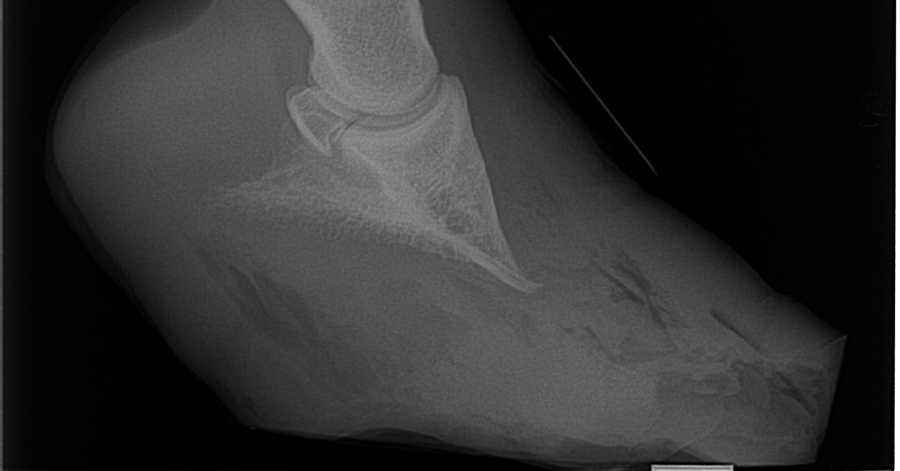 Well that’s a bit of a defeatist attitude isn’t it! Stay with me here, there’s hope I promise… Horses can get over laminitis, I’m just not sure they can be cured of it.

You see, laminitis isn’t a disease, really. Firstly, lets define some terms so we’re all on the same page, and debate is centered about the actual issue rather than simple terminology.

Founder means the pedal/coffin bone has moved within the hoof capsule, either rotated or sunk

Disease – I’m going with the Oxford English Dictionary here
a disorder of structure or function in a human, animal, or plant, especially one that produces specific symptoms or that affects a specific location and is not simply a direct result of physical injury: bacterial meningitis is quite a rare disease

Symptom – again, thank you Oxford English Dictionary
a physical or mental feature which is regarded as indicating a condition of disease, particularly such a feature that is apparent to the patient: dental problems may be a symptom of other illness

A symptom is a warning sign, it lets you know there’s a problem in the body. It is often part of the way the body deals with a problem like a disease, injury or other condition.

Sadly the definition of a cure in the Oxford English Dictionary is this:

I agree that eliminating a disease or condition is a cure, but I’d strongly disagree that relieving symptoms is a cure.

Treating symptoms is a little like hearing a fire alarm, and rather than putting the fire out, you simply turn off the fire alarm. You could remove the bell or take away the power source from the alarm. You could even put your fingers in your ears and shout ‘la la la’ (which was my prefered choice when my back got stiff – seriously – I don’t recommend it!)

It’s fairly obvious that it would be a better option to put out the fire. Unfortunately in the western world, ignoring symptoms is so common it’s thought of as normal, even good management. We’re all sitting there, having quieted the alarm wondering why we’re getting hot and finding it difficult to breath.

What’s all this got to do with laminitis? Well laminitis is a symptom.

Inflammation – I used an online medical dictionary for this one
a protective tissue response to injury or destruction of tissues, which serves to destroy, dilute, or wall off both the injurious agent and the injured tissues. The classical signs of acute inflammation are pain (dolor), heat (calor), redness (rubor), swelling (tumor), and loss of function (functio laesa).

The problem is that laminitis is a really serious problem. It really grabs your attention and doesn’t let it go. When you see it in your horse it’s all you can think about. It’s essential to address it. I agree with that. Relieving the pain is really important to recovery. Management of the symptom is essential.

What’s also important is to remember what you’ve done. You’ve managed the symptom. You still need to find and address the cause of the inflammation, which is very rarely found in the feet, so make sure you look up, above the coronary band 🙂

It has such a massive effect on the hooves, because the hoof capsule doesn’t stretch very well. The rest of the skin will stretch to accommodate a little inflammation without too much trouble. The hoof capsule, not so much.

Ironically, the stronger the hoof capsule, the more susceptible to inflammation it is because the hoof capsule is packed full of dense soft tissue, and the hoof horn is that much stronger so will be less able to stretch when there’s extra fluid (inflammation) inside it.

Not convinced? How about these well known statements

Now, lets compare that to horses most prone to laminitis…. Cobs, ponies, native breeds. It’s commonly thought that they get laminitis because they’re good doers, and fat horses are laminitic. I don’t believe that. I believe that the thing that is causing the horse to be fat is the same thing that’s causing the laminitis.

That could be just semantics, but here’s the thing. If you can remove the cause of the inflammation, then the horse will be comfortable, and the weight will sort itself out. If you just try to remove the fat… well, you’re treating the symptom again. I agree, it should be addressed, but I’d rather start with the actual problem.

When an overweight person goes on a healthy diet, they often lose 2 or 3 times the weight in the first week than they will in the second week. It’s not unusual for someone with a few stone to shed, to lose ½ a stone in the first week. Often this large amount of weight loss is chalked up to ‘water weight’.

What this means is, you can get rid of the inflammation very quickly if you make the right changes. You don’t have to wait months for the fat to be worked off for the inflammation to go. Turn this back into a discussion about hooves and you can remove the pain in the feet very quickly, long before you get the weight off your horse.

What’s more, if they’re not getting out of pain quickly, you haven’t yet removed the cause of the inflammation.

Treating symptoms is a little like playing whack-a-mole. Unlike whack-a-mole, which I think is rather fun, it’s hard work, time consuming, costly and often leaves you so distracted and stressed you have little energy to address the root cause.

Symptoms do need to be managed though. They’re real, and often unpleasant. I’m not saying your hard work of managing the symptoms of laminitis is unnecessary. What I’m saying is, if you want to make real improvements, you need to find the root cause.

Inflammation isn’t too far different from a bruise. It’s on a larger scale, and tends to have a different cause, but they’re fairly similar conditions. You’d never try to ‘cure’ a bruise. It sounds a little ridiculous. You’d remove the cause of the bruise (ie you’d remove your coffee table from your shin. Probably not from your house though).

Equally, if you had a bruise that went away, and then you got another bruise a few days, weeks, years later. You’d never say the bruise had come back. You’d recognise it as a totally different event. Maybe you’d curse for having walked into the coffee table again, but you’d still recognise it as a separate event from the last time.

Horses can, and do, get over laminitis. Often there is no lasting damage, sometimes, unfortunately, there is. The trick is to recognise it as early as possible, and identify and remove the cause.

What do you think?
Has laminitis been a problem for you?
Has this post made you think differently about it?
Do you think I’m wrong and a little bit odd?
Tell me what you think in the comments below…