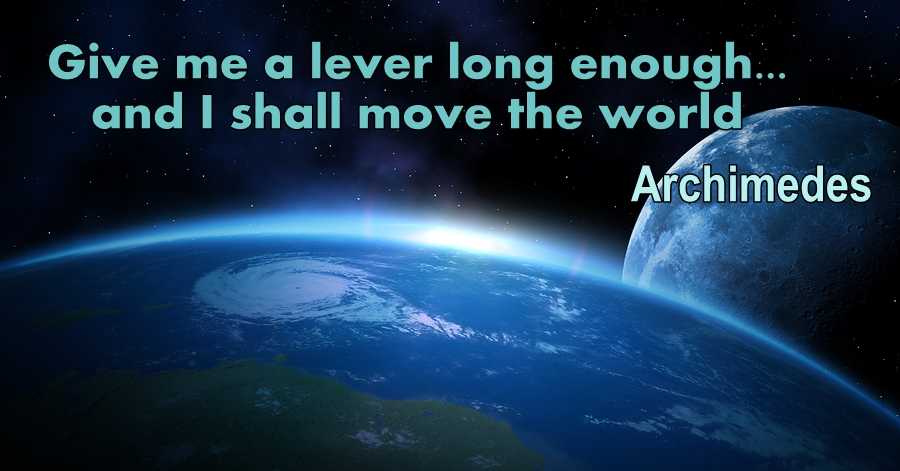 How much will the leverage caused by a long toe and low heels really weaken the laminar attachment of the hoof capsule? Let’s look at what’s really going on. What causes it and how can you stop it?

Archimedes said he could move the earth if you gave him a long enough lever and a fulcrum to place it on. I don’t doubt that, though the difficulty in proving or disproving his claim, is in finding a lever long enough and strong enough, a place to put the fulcrum and a place to stand to operate the lever.

No doubt there are other considerations, but let’s not stretch the analogy too far, we’re talking about trimming hooves after all!

People talk a lot about the effects of leverage on a horses hoof capsule. Some say it’s a problem, some say it’s useful but who’s right? Regular readers of this blog won’t be surprised to hear me say, both arguments make valid points; it just depends on where you’re starting from and what you’re trying to achieve.

Leverage is defined as the exertion of force by means of a lever. For our purposes it means the force placed on a hoof from the ground by the movement of the leg. Breakover would be another term for it. Breakover usually refers to the forces on the toe, but during lateral movements the forces would be more on the quarters.

Breakover starts when the heels first lift off the ground and ends when the toe leaves the ground, so the forces are primarily on the toe.

Breakover is really important. It’s fundamental in propelling a horse forwards. In most cases, you hear people talking about shortening the breakover to reduce the leverage effects on the toe and thus the stress to the laminae.

It’s worth noting that these forces are what the horse is using to propel himself forwards. The more you shorten the breakover, the less the horse has to push off with, which means movement requires more muscle power and you may well have a shortened stride and less endurance.

In the case of laminitics, where reducing the stress on the laminae at the toe is very important and effectiveness of forward motion isn’t important, shortening the breakover can be very valuable. But what about cases where there isn’t laminitis? 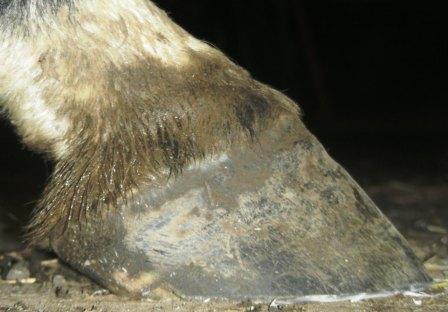 The idea that the toe growing a little long places it under so much stress from breakover that it will cause enough stress to the laminae that it causes rotation or stretching (which is the precursor to rotation anyway) seems a bit over the top to me.

Think about it. While I don’t subscribe to the idea of a wild horse trim for domestic horses, there is great value in thinking about things from the wild horse perspective.

Picture this; for whatever reason a wild horse grows a long toe and *gasp!* there’s no hooman to fix it for him!! If the effects of leverage when the horse breaks over is as important as they say, then it won’t be long before that horse tears it’s hoof capsule away from the internal structures.

That doesn’t sound likely right? Yet we apply the same reasoning to domestic horses all the time. There’s a bit of stretching at the toe, so it’s trimmed back to fix it. Does that help?

Yes to a point. It helps reduce the leverage on the toe for sure. But here’s where it goes wrong for me. Was it the leverage that caused the problem? It can’t be. The toe has to have grown long for some reason. If leverage made the toe stretch, and the stretched toe is causing a leverage problem, then both things have to happen simultaneously.

A toe can’t grow long BECAUSE too much leverage is placed on it, as it would need to already be long to cause the leverage. (I keep trying to write this in a way that makes sense, but I don’t think I can, my point is… it doesn’t make sense!!)

I’m struggling with finding an analogy for this one, so feel free to add your suggestions in the comments below, but think of it like this. If someone is overweight, it’s not because they’re overweight.

It’s because there’s an imbalance in their environment. Removing the fat would temporarily remove the weight from them, but the fat wasn’t the cause of the fat, so it’s going to come right back unless other changes are made.

I don’t believe the long toe does provide enough leverage to cause stretching. Not on it’s own anyway. Laminar attachment is unbelievably strong. Strong enough to withstand the stress of the weight of a whole horse, complete with rider landing predominantly on 1 hoof after going over a 6ft jump.

I believe to get stretching at the toe; you have to weaken the laminar attachment. If it’s functioning properly, it’s too strong to be upset by a little extra leverage.

Stretching of the white line (which is a less terrifying way to say, stretching of the laminar – though they amount to the same thing – sorry) happens far more to ‘pasture ornaments’ than it does to working and competition horses (based on my experience anyway).

Yet the hooves of competition horses are clearly under a lot more stress and have far stronger mechanical forces placed upon them.

I think it’s low grade inflammation that’s causing the problem. Inflammation weakens the laminae and can cause the toe to grow much faster. It can also cause a posture issue that causes the horse to lean his weight on his toe.

Chuck in some inflammation to weaken the laminar attachment and I can totally see how you get stretching at the toe.

What isn’t clear to me is how trimming the toe back helps fix the problem. It reduces the leverage, yes, but the leverage is a by-product, not the cause. The correct trim is important, but it rarely fixes the problem. You have to find the problem!

Where to Concentrate Your Efforts?

The force on the hoof capsule, COMBINED with the force of the inflammation is what I think is doing the damage. We know that the mechanical force alone isn’t going to cause damage and the metabolic force most certainly can.

When we’re trying to correct problems with our horses’ hooves, we really do need to look at more than just the hoof capsule. Hoof balance isn’t always the answer to the problem, though it is frequently affected by whatever the real problem is.

Nothing happens in isolation. The body is all connected. It’s easy to blame hoof balance for causing a problem in the body, but if there is a connection between those 2 things then it must be possible for the body to affect the hooves just as frequently.

Trimming (or shoeing) isn’t always the right tool for the job when it comes to fixing hooves. It doesn’t necessarily reflect on the skill of the hoof care professional. The best saddle in the world won’t make you a good rider if you suck. At best it will only help you to sit in a more balanced way. Once the horse starts moving – you’re on your own!

(and yes I’m talking about myself there – I look like a great rider, right up to the point where the horse starts moving – it’s somewhat downhill from there 🙂 Good job I’ve got a lifetime to learn I guess…)