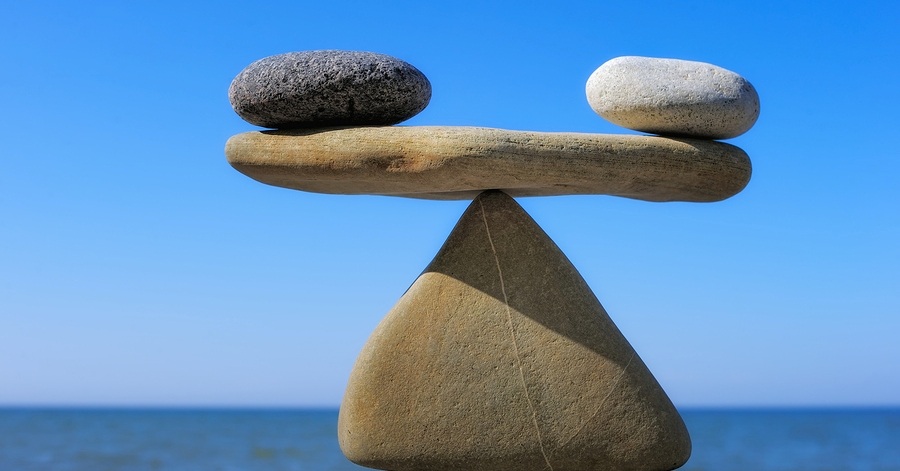 Good hoof balance should focus on more than just the feet. The focus should be on whole horse health. A healthy horse has healthy feet. The hooves are constantly regrowing and regenerating, so if there’s a health problem, it’s going to show up in the hooves. While having correctly balanced hooves is important, it’s also important to have a correctly balanced horse.

If there’s a neuromusculoskeletal issue that’s causing a horse to move incorrectly, or load the hoof incorrectly, it’s going to affect the way the hoof grows. Possibly growing flare or causing a crack in the hoof wall.

Flare can be trimmed out easily enough in most situations, but removing flare is never going to release off a tight muscle, calm a nerve problem or loosen up a stiff joint. What’s more, as removing flare can’t possibly correct or improve any of these conditions, it stands to reason that it’s not going to do anything to address the cause of the flare, so the flare will return.

It’s easy to see an imbalance in the hoof, and then assume that is the cause of a problem higher up in the leg. But what if it’s the other way round? In fairness, either scenario is possible, but the truth of the matter is, most horses have their feet rebalanced every 6 weeks, so this is less likely to be the cause of the issue. (Unless of course they’ve been balanced badly, but I’m assuming that’s not the case)

This is why looking at the whole horse is so important. Neuromusculoskeletal problems aren’t the only cause of poor posture or gait abnormalities. Organ health is also a significant factor. Poor digestion can have a significant effect on posture. Ask anyone with a food intolerance, or see how their posture changes when they’ve eaten something that wasn’t right.

Gut discomfort causes the core muscles to become weak, which in turn puts the back muscles, particularly the lumber, under strain. A tight lumber causes tension in the stifles and this reflects in the hocks. Gut discomfort is very common in horses, as their guts are a huge part of them. In fact gut discomfort is so common, the symptoms are often referred to as ‘normal’.

Just because something is common doesn’t mean that it’s normal or correct. It just means that you see it a lot. What’s the normal every day sign of gut discomfort in a horse?

If a hay/grass belly causes discomfort, maybe even pain, in the stomach, stiffness in the lumber and tension in the stifles, then what would the effects of exercise and ridden work be?

Well it would be impossible for the horse to round it’s back and it’s likely the hamstrings would do extra work to take some strain off the back. Both of these things would shorten the stride of the hind legs, possibly to the point of causing a toe first landing. which would put even more strain on the stifles.

The toe first landing, would cause the toe of the hind feet to be worn short if the horse is barefoot, wear though your hoof boots at an alarming rate if you use them, or if your horse is shod, then the tension in the muscles will increase at a faster rate.

If you fall into the barefoot category, then you might just get away with it on the hoof balance front as interestingly the effects on the posture caused by these problems creates a stance that stimulates the toe to grow faster. Technically that’s balanced hoof wear!!! I’d argue that it’s not a balanced horse though!

Everything about a horse’s health and wellbeing affects their feet, their hoof balance and their performance. All of this is significant regardless of whether or not there’s a shoe on the bottom of the hoof.

I remember a conversation I had a while ago with a lady whose horse had stomach ulcers. I don’t remember it word for word but it went something like this

Her: My horse has really bad feet, because he has stomach ulcers, I’m sure you can imagine. My farrier’s done a great job at improving them with shoeing though
Me: Are you saying you’re expecting your farrier to be able to shoe your horses stomach ulcers better?
Her: Oh my god! Yes that is what I’m saying, it sounds really silly when you put it like that.
Me: Well I’m glad the feet are getting better, but we could probably improve the results and make things easier on your farrier if we addressed the stomach ulcers through diet.

You see she had a great farrier. It wasn’t at all under dispute that the hoof problems were due to the stomach ulcers, yet still it was expected that farriery should fix the problem. For me that’s addressing the problem from the wrong end. That’s sitting in a boat that’s taking on water bailing it out, rather than putting a bung in the hole that’s letting in the water.

As the hoof care professional involved I’d feel like I’d been set up for failure if I were in that situation. Addressing the whole horse is essential if you want to get the results fast. I’m impatient, and a perfectionist. I want things to get better, but I’m not happy about just correcting the hoof balance, then going back 6 weeks later to do it all again.

That reminds me of the bloke in purgatory who has to push the big rock up a hill only to watch it roll back down so he has to push it back up again, over and over again. I can’t remember his name – but I know he had one! Answers below please Greek mythology fans…

Let’s go wild! Let’s address the gut issues, and the related neuromusculoskeletal issues, so we improve the posture, and the gait, the skin and the health, lets do all that and the hooves too. Get better performance and happier owners.

I know that all sounds like a long job, it’s certainly a longer to do list than just ‘shoe horse’. But if it’s an imbalance in the gut that’s causing the hoof problems then surely the easy way to fix the hooves is to address the gut issue.

Here’s the thing, if you’re addressing the gut problem, how important is the shoe in the first place? I don’t mean, it’s not important so don’t use one. I mean, it becomes less important so who care if it’s there or not. Shod horses deserve good health too, but shoes are so effective at covering up problems, you can get away with bad health without the horse going lame.