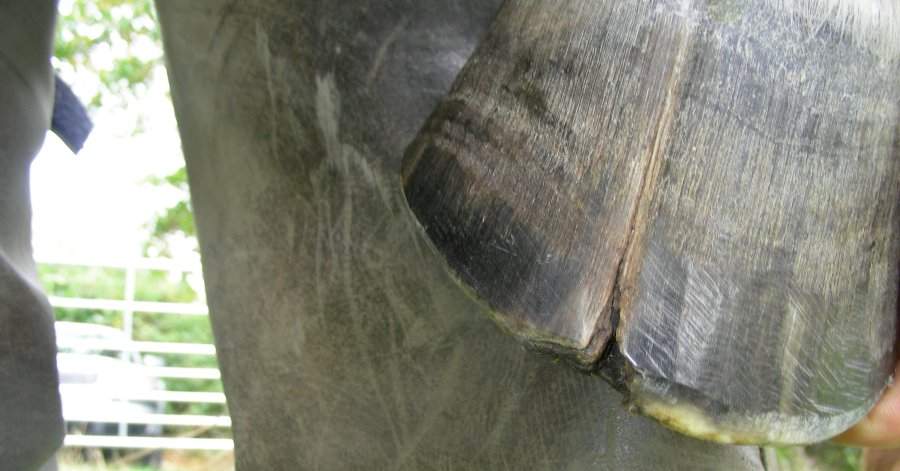 In Cracks Pt 1: The Real Cause of Hoof Cracks we were talking about what forces were acting on the hoof capsule during the stride. These uneven forces can create distortions in the hoof capsule and cracks can develop in sites of weakness. Having these forces going in directions they weren’t meant to causes a site of instability.  This results in a hoof wall crack developing.

The heels are designed to absorb and utilise the shock of the hoof landing. No other part of the hoof is designed to do this, so if they’re not landing correctly on the heel, the shock isn’t absorbed or utilised properly. This means the hoof capsule isn’t receiving the correct stimulus to grow and the structures in the hoof are suffering more concussion than they were designed to.

In summary, there’s more shock, it’s being applied to structures that weren’t designed for it and it’s going in the wrong direction. That’s why fault lines – or structural cracks appear.

The worse the problem is, the bigger or faster a crack will appear. I think this is why people often think a hoof crack is making a horse lame.

A lame horse will be weighting at least 2 feet unevenly (the lame leg and the supporting leg) and possibly all 4 feet. This can make a crack (or cracks) appear, then when you’re looking for the cause of a problem, you remember the crack wasn’t there when the horse was sound.

These structural cracks caused by incorrect forces being applied to the hoof capsule aren’t the only thing that can cause cracks. There’s also cracks due to corium damage, nutritional imbalance or micro cracks. (Note: I don’t list infection as a cause – you’ll have to read to the end of the series to find out why!! Yep – a teaser in an article on hoof wall cracks – who’d have thought!!!)

The hoof wall is grown by the laminae and the coronary band. If either of these corium (the blood filled deep layer of skin that grows the horn) are damaged or injured, then there will be a gap in production of the hoof horn.

This can happen due to an accident damaging the corium. If the accident has been severe enough to result in scar tissue, there will be some papillae in the coronary band or laminar unable to produce horn. This is going to result in a weakness and most likely a crack in the hoof wall.

Sometimes these cracks can be tiny, less than a mm deep and wide, other times they can be bigger. It depends how much scar tissue there is and where it is.

In the picture at the top of this post is a hoof crack that’s been there ever since a car hit the horse (about 15 years ago I believe) not only is there corium damage, but a weakness/stiffness in the leg that contributes to a structural imbalance too. That crack, while unsightly hasn’t caused any issue (I hope I’m not tempting fate here!)

Unless you have a way of removing the scar tissue and replacing the missing corium, without causing more scar tissue, you’re going to have to learn to live with these cracks and manage them as necessary. Much like you will with any scar.

If you do have a way of removing scar tissue from within a hoof capsule, without causing further damage, please let me know!

A nutritional problem, with no structural imbalance will give you a number of small cracks all around the hoof, there won’t be much of a pattern to them. It’ll look like dry and crusty. Sometimes it can even look like wrinkly skin.

This kind of horn can be very brittle, making it less able to withstand the normal concussion of the hoof landing. Bash something brittle around and you’re going to get cracks in it!

Cracks show up much more easily on white hooves. Not because white horn is weak, but because it’s white. A crack shows up because dirt or infection gets trapped in there, this stands out in a crack on a white hoof. It’s still there on a black hoof – you just can’t see it as easily.

If you have short vertical cracks in a horizontal ring then you had a nutritional problem for a short period of time, which then corrected itself. Maybe the diet changed, maybe you had a circulation problem at that time, due to inflammation or abscess. 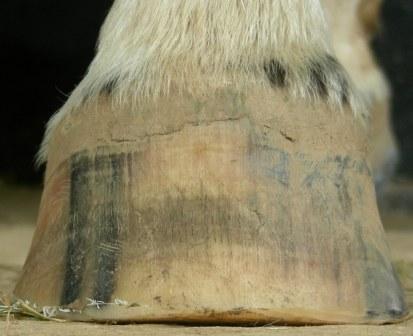 In this picture, the ring of cracks coincides with a laminitic attack in a chronic laminitic. This is the hind foot which didn’t have rotation

This kind of thing is quite common after a period of snow fall. The horses environment often changes quite a bit when there’s snow. No grass, more hay, temperature changes, less exercise not to mention possible hydration problems.

You’ll see this ring of different hoof horn about 2 months (ish – depends on your hoof growth rate) after the snow. The periople that covers the new horn growth, will cover up these cracks. You’ll see them, once the horn has grown out below the periople. This is why cracks seem to ‘appear’ in the middle of the hoof.

If you don’t see these cracks, going down the hoof, you may notice that band of horn is more prone to chipping when it reaches the bottom of the hoof. With a normal growth rate that will take roughly 3 months at the heels, 6 months at the quarters and 9 months at the toe. 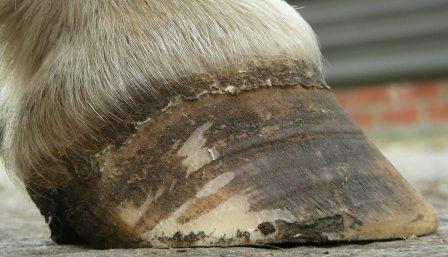 This is a great picture, a laminitic again, and the hind foot which didn’t have rotation, but you can see where the ring of cracks has reached the ground at the quarters and started to break up. It’s not quite at the ground in the toe yet, but it will probably break up when it gets there.

If your horse is shod, it’s not going to chip, but you may find the horn breaks up around the nail holes more than usual, or you lose a shoe more easily.

Of course, you might not have this happen at all – that’s a good thing! You don’t have to have problems, I’m just pointing out something you might have seen!

Nutritional problems combined with structural imbalance – well, now we’re cooking on gas! You’ve got it all! A hoof capsule that is brittle and less able to absorb concussion, and forces going in directions nature did really intend. The up side is – there’s lots you can do to improve things!

At this point I should point out that cracks are a sign of imbalance. I’ve said that before I know but what I mean is, they are not necessarily a sign of impending doom! Most cracks don’t cause a problem for performance or soundness, though I do think it’s worth addressing the imbalance where possible.

I always think it’s worth addressing an imbalance where possible – I’ve pretty much dedicated my life to it!

I’m talking about noticing and understanding early warning signs to improve your horse’s health, and thus make your life easier, I’m not talking about the inevitable breakdown of every hoof – so no panicing please!

Cracks caused by nutritional problems are usually as a result of poor interconnective horn. That’s the stuff that binds the horn together, so it stands to reason, if you’re producing poor quality interconnective horn or simply not enough of it, then you’re going to get cracks.

When these start you can’t see them, because they’re micro :). They can develop into larger cracks that look much like nutritional cracks. They’re generally caused by external influences. Stuff you put on the hoof wall.

Here’s the thing about the hoof wall, it’s a wall. A barrier, it’s there to stop stuff getting in. If you put some sort of potion on the outside of the wall it can do 1 of 2 things.

If it penetrates the hoof wall, then it must do damage. I can’t see a way for anything to penetrate a structure designed to keep stuff out, without causing damage. If the horn is being damaged, by the very nature of the horn tubules being held together by interconnective horn, it’s going to crack, or at the very least get micro cracks which can develop into bigger cracks.

If you want to read more on this, here’s a great article

If you want that article summarised into a sentence – Don’t use hoof dressings, they have little effect on good horn, and cause further damage to weak horn, get strong horn through good nutrition.

Often cracks are thought to be because the hooves are dry and need moisturising. Dry hooves are a sign of poor nutrition. Soaking the hooves in water will make the problem worse, moisturising the hooves probably won’t help (see above on micro cracks). Hydration of skin is as much about electrolyte balance as it is about water content. Hoof horn is skin.

In Part 3 we’ll talk about what makes cracks worse, what does and doesn’t work to improve them, and the role that infection plays.

and more with a FREE Hoof Geek Academy membership